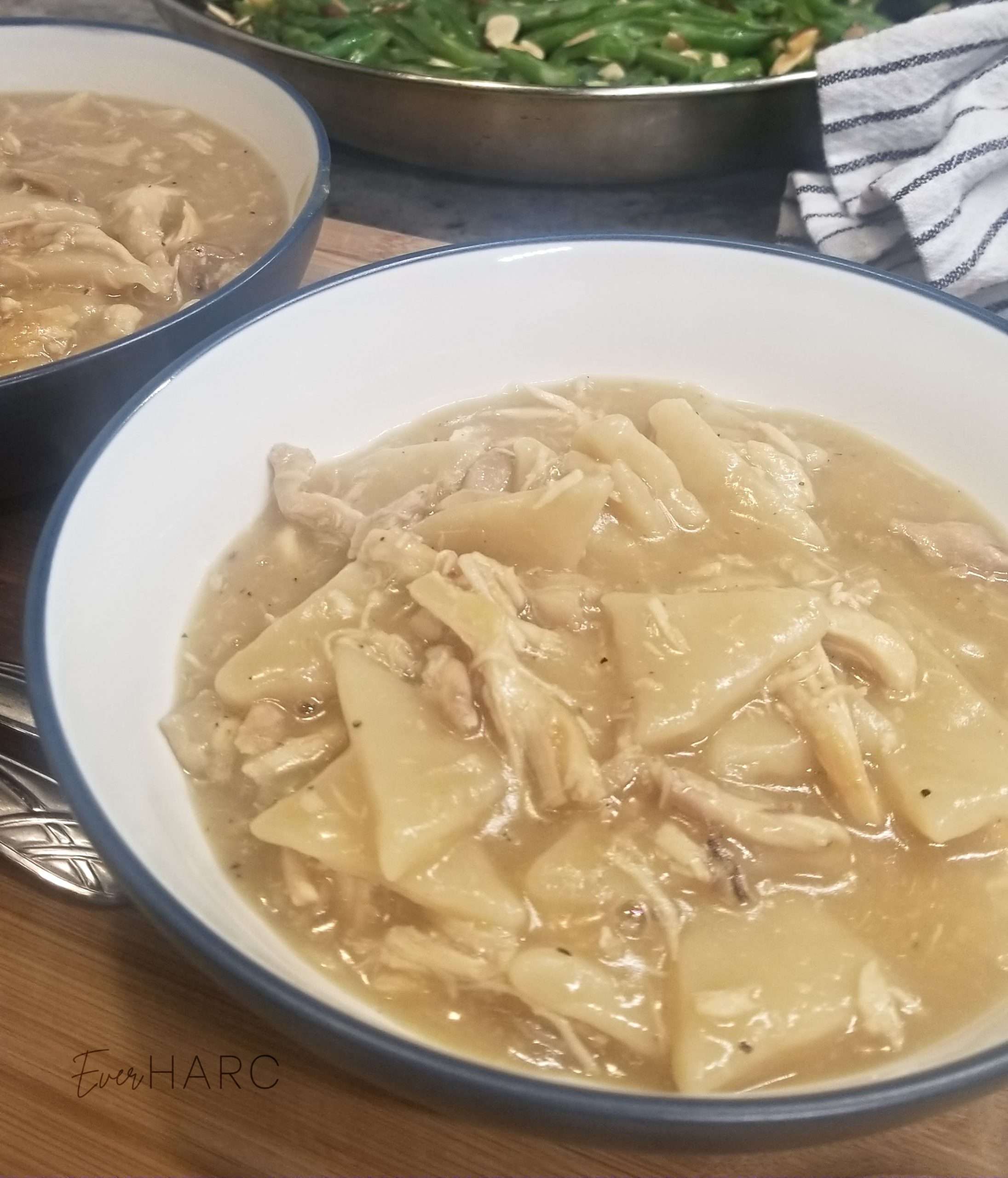 Chicken and dumplings is a classic comfort dish that I endeavor to make at least once every winter. Warm and filling, it is the type of stick-to-your-ribs-and-buttocks dish that I could indulge in year-round but feels particularly well suited to brisk autumn nights and chilly winter days. It is a fine example of a dish that nourishes both the body and the soul.

Ever Harc is reader supported, therefore, this post may contain affiliate links. As an Amazon Affiliate, I may earn a small commission when you click on these affiliate links at no additional cost to you. You can read my full disclaimer here.

My Chicken and Dumplings Story

My most treasured memories are centered around shared meals, and homemade chicken and dumplings are particularly meaningful for me.

During the early part of my career at a construction company, I was fortunate to work with my very favorite kind of person – a curmudgeonly old man with a heart of gold. His name was Richard, and despite his gruff exterior, he and I hit it off immediately.

After noticing my consistent envy over his homemade chicken and dumplings in the lunchroom, Richard began packing a double helping of dumplings so he could share with me. And perhaps so I would stop shamelessly drooling so close to his food 😉

It became a work-time tradition that I came to treasure and sparked a meaningful relationship with both him and his wife, Joyce, that I think of fondly to this day.

On a fateful winter day, while delivering some homemade goodies as a small token of appreciation for their many kindnesses, I ventured to Richard’s home. It just so happened, I timed my trip to perfectly align with a day dedicated to dumpling-making. Richard and Joyce immediately invited me to join in, and I readily accepted!

We spent the afternoon bringing together an absurd amount of dough, rolling it out and cutting it all into perfect little squares all while filling the kitchen with stories, laughter and a fair amount of excess flour.

Sadly, Richard passed away in 2016. Yet, to this day, I think of him and Joyce every time I make dumplings. They are a constant reminder to me that food unifies us in the most beautiful of ways. 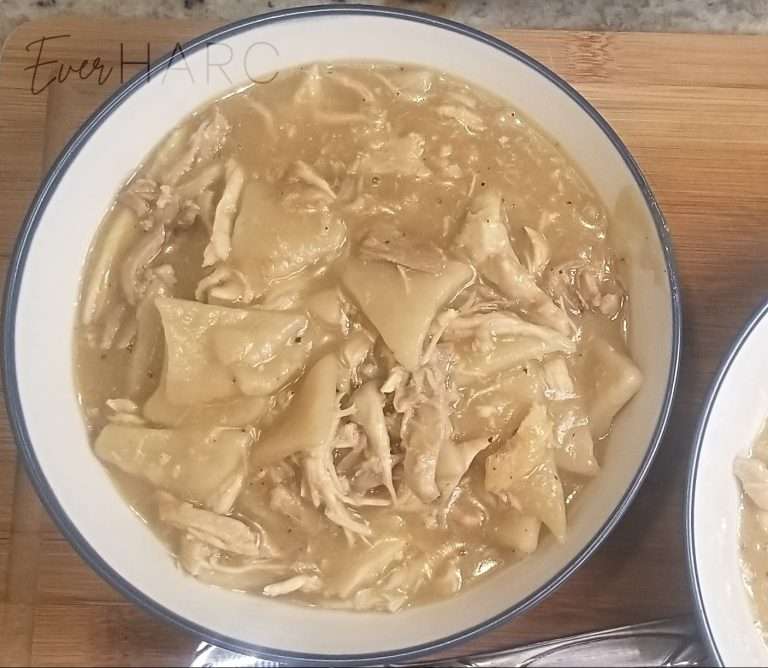 Dumplings cover a pretty broad category and every region, country and family have their own version. In layman’s terms, they are basically cooked batches of dough. For the dish known as Chicken and Dumplings, there are two schools of thought when it comes to the dumplings – the rolled variety and the drop variety. I have experimented with both, and I believe both are perfectly delicious and have their merit.

I grew up eating the rolled form of dumplings, so I gravitate to this form. It’s hard to beat the nostalgia associated with this comfort dish. When rolled out, this dumpling dough has the appearance of a pasta-ish type dough (I am all about the technical terms for things). The recipe I will be focusing on is the rolled version. 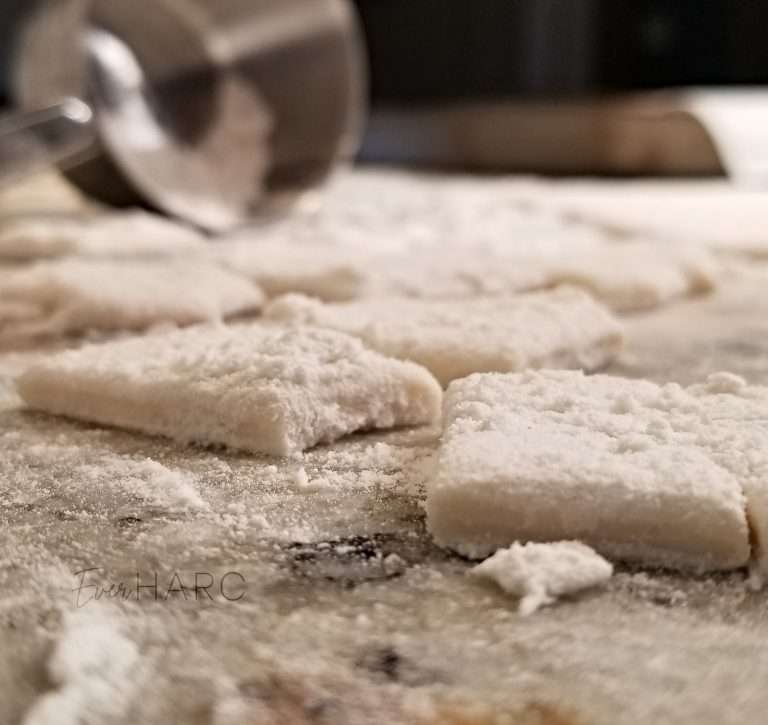 Potential Variations for Chicken and Dumplings

The Chicken and Dumplings that I grew up eating did not have any additional herbs or veggies. They were simply chicken, dumplings and broth.

Occasionally, I like to freshen things up by adding the holy trinity of the kitchen: onion, carrot and celery. You could also add some frozen peas toward the end of cooking.

If I have some herbs that need using up, I will add those as well. Thyme is a welcome addition and adding some parsley to individual bowls gives this dish a pleasing pop of color. We eat with our eyes first, right?

Don’t feel like you have to stick to chicken either. Dumplings are a Thanksgiving tradition for my husband’s family and since turkey is the traditional Thanksgiving protein, they add – yeah, you guessed it – turkey. And it is perfect and decadent and delicious in every way.

Looking for even more comfort food options? Check out these other great dishes! 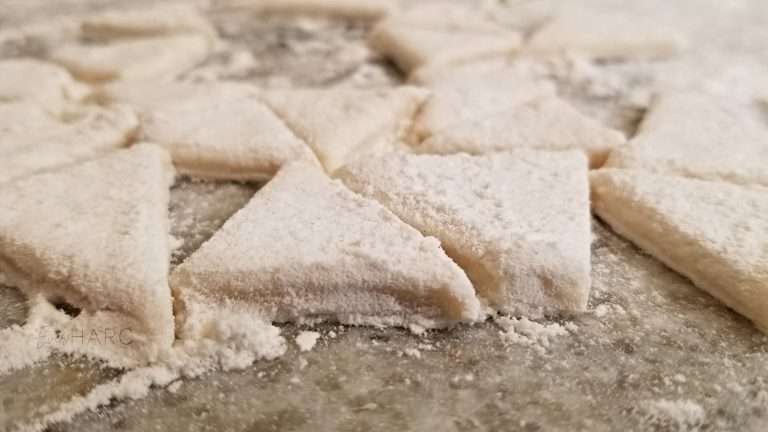 Place chicken breasts on a parchment-lined baking sheet. Drizzle with olive oil and season with salt and pepper. Bake chicken for 35 – 45 minutes depending on the size of chicken breasts.

While chicken is baking, begin making your dumplings. Combine flour and baking powder in a bowl. Cut in cold butter using a pastry cutter or a fork until you have pea-sized pieces interspersed throughout your flour mixture. I like to use grated, frozen butter. I always keep an abundance of butter on hand split up between the fridge and the freezer 🙂

Add the buttermilk and mix together until you have a homogenous dough, being mindful to not overmix.

Transfer your dumpling dough to a generously floured work surface. Dust the top of your dough with flour and roll your dough out to ⅛” thickness. I like to use this nifty rolling pin to take the guesswork out of rolling thickness. It is also super useful for pie and cookie doughs.

While rolling out your dough, add flour as necessary to prevent your dough from sticking to your work surface and rolling pin. Don’t be shy, the additional flour is going to help thicken your broth base when you add the dumplings to the chicken stock. 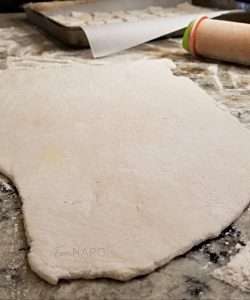 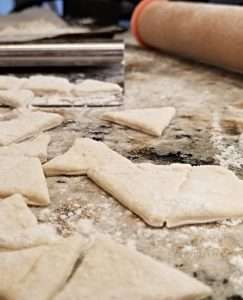 Using a pizza cutter, cut out your individual dumplings. Squares and rectangles are pretty traditional, but I have been pretty partial to cutting them into triangles as of late. I find that I can move through cutting the dough pretty quickly while still maintaining uniformity. Now, uniformity is not required when cutting out your dumplings. Dumplings are inherently rustic and unfussy, so you-do-you for this part.

Once your dumplings have been added to the stock, add your shredded chicken and stir. Season with salt and pepper to taste. Allow your dumplings to cook for 15 – 20 minutes or until cooked through and tender. As your dumplings cook, you will notice that your stock base will naturally start to thicken due to the excess flour on your dumplings.

And there you have it – ultimate comfort in a bowl! 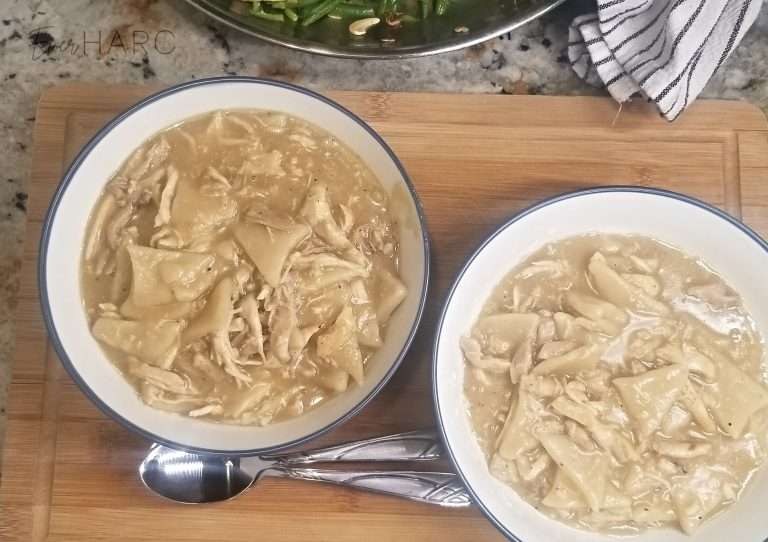 For most things, it doesn’t take much longer to double up on the recipe than if you were just sticking to one batch. To freeze the dumplings, I very generously flour cookie sheets covered with wax paper and add the dumplings in a single layer after cutting.

If adding multiple layers to the same cookie sheet, add more flour and wax paper between the layers. I then keep the cookie sheets in the freezer for a couple of hours before transferring to freezer bags for long-term storage. Putting them directly into freezer bags without first freezing them in single layers causes them to stick together pretty badly when thawing out. 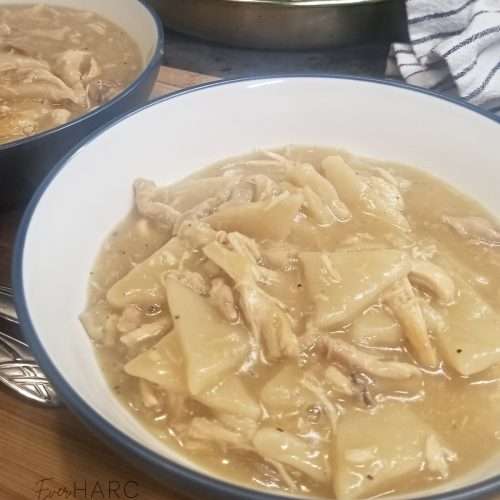 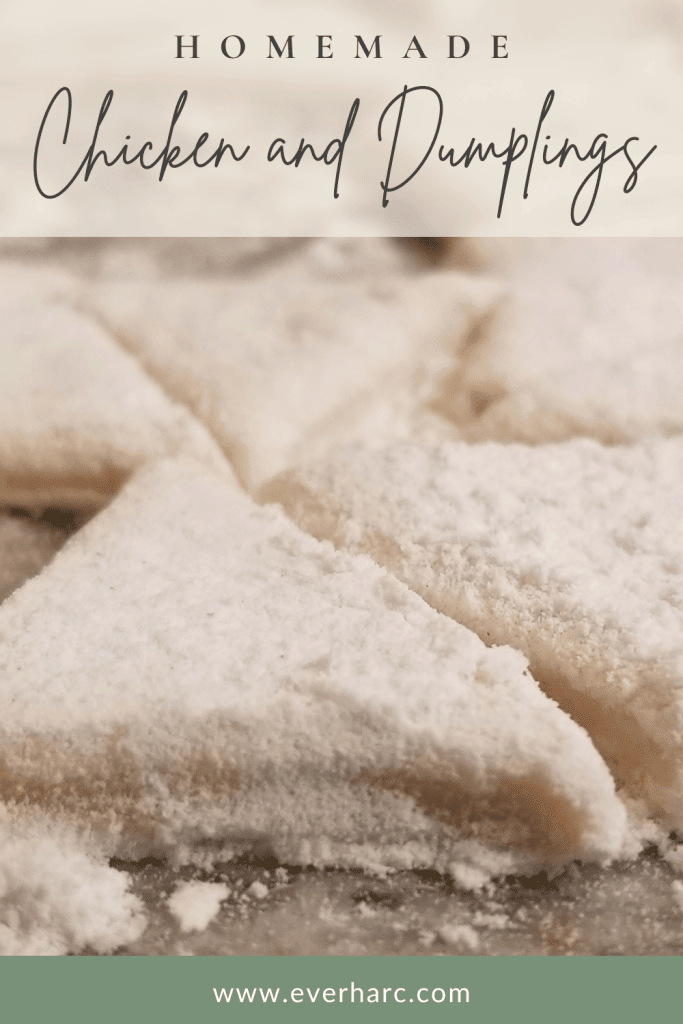 Chicken and dumplings definitely hold a special place in my heart due to all of the heartfelt moments I associate with this dish.

What is your most meaningful memory centered around food?

Drunken Two-Meat Chili – Sure to Satisfy With Every Bite

This site uses Akismet to reduce spam. Learn how your comment data is processed.

Welcome to Ever Harc!

With a focus on easy and affordable recipes, practical DIY projects and engaging activities for kids, I work hard to make your life easier and help you find balance in the day-to-day.